We set up multiple video cameras with extra sensitive parabolic microphones in Denny’s personal recording studio that make you feel as if you’re right there taking a lesson with Denny.

In these full length feature films Denny guides you finger-by-finger, string-by-string, just as if you were in his studio, and shows you all the secrets he’s learned from playing, teaching, and performing over 65 years.

Many students say that the knowledge they gained in only one lesson with Denny made such a dramatic impact on their playing that it allowed them to make advances that years of previous instruction were never able to achieve.

This is an incredible bargain considering Denny gives personal lessons to only a handful of students annually at $200 per hour.

Denny will be adding new lessons to his library throughout 2016.

The Zager Guitar System revolves around playing guitar by ear. This is the same way many of the greatest guitarists of all time have learned to play.  George Harrison, Jimi Hendrix, B.B. King, Jimmy Page, Keith Richards, Eric Clapton, Jeff Beck, Stevie Ray Vaughan, Eddie Van Halen, Slash, Chet Atkins. The list goes on and on.

This easy to use manual will show you how to use Denny’s  guitar system by showing you how to play a song right away and NOT reciting endless hours of notes and scales.

This makes learning exciting because at the end of your session you have a complete arrangement you can play for anyone. This is the same easy to use manuscript that has shown millions of people how to play the guitar quickly and painlessly.

Denny even put made a video (for those who don’t like reading) where he skips through to the important parts that show you what you need to know to start playing right away.

The goal of the Zager System is to get you to what Denny calls the “reflex stage” where you’re playing on a subconscious level. You’re moving your fingers and sounding good…you just don’t know how you’re doing it!

You may think this is impossible but after 60 years of teaching and seeing thousands of students do it it happens at a much faster rate than you expect.

Each video package consists of:

There’s no better way to learn than having the 70 year master (who invented the system) show you how HE does it close up one finger at a time. These demonstrations will allow you to see Denny play in real time with close up slow speed video of his left hand, right hand, and also a simultaneous two handed view so you can see every one of Denny’s fingers from every possible angle.

Denny often tells his private students that learning from him online is actually superior than learning in person because you can back up, pause, and follow these demonstrations again and again until you master the movements yourself. 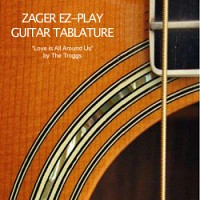 Zager “Easy Play” Tabs are fully downloadable and printable color guides that provide you with the chords and hand movements to play any song you desire.

If you compare Zager tabs with regular tablature you’ll find Zager tabs are much easier because they have pictures that show you exactly where to put your fingers.

They also have lyrics, verses and bridges which make your finished arrangements sound that much better.

Zager tabs are the first step towards reading and writing full arrangements which ultimately lead to playing completely by ear using no tablature at all.

Have you always wanted to learn fingerstyle but when you tried found it so complicated that you went back to strumming or using a pick? If this describes your experience then this part of the library is for you.  The most comprehensive fingerstyle instruction guide on the world wide web.

Denny’s research has shown that the majority of people tend to ask the same questions about many of the same topics. These videos will provide you with the valuable feedback that’s generated from having a student present asking questions.

If Denny’s working on a specific musical piece you’ll also receive the full color PDF download for that particular song.

This is a tremendous bargain considering all the valuable knowledge you’ll gain from these lessons, only at a fraction of the price.

Denny will be adding new in studio videotaped guitar lessons to his online video library all year long.

Have you always wanted to write and arrange your own music?  Denny will show you a system he’s used over 4 decades, the same system that helped him write the biggest one-hit wonder of any artist at any time in recording history selling over 20 million records.

Denny’s taught many children over the last 40 years. To be able to help even more children Denny’s putting together a special section that will have videos and instruction techniques designed exclusively for younger players. Coming Summer 2017.

Denny’s spent over 70 years playing and in that time he’s developed a guitar chord library which incorporates full color pictures that will give you instant access to every guitar chord that can be played on a guitar. This will show you exactly how to form each chord and exactly where to put your fingers on the strings without having to read music.

As a Zager Guitar Student you will have lifetime access to this part of the library even if you decide to end your membership.  Denny’s always adding new parts to his library and this part should be completed summer of 2018.